Can pretty much guarantee that no other tour company in the city would consider sharing a story like this on any bus tour of Washington DC,  DC walking tour, or a private DC tour. We have created some incredible DC guided tours in the nation’s  capital! 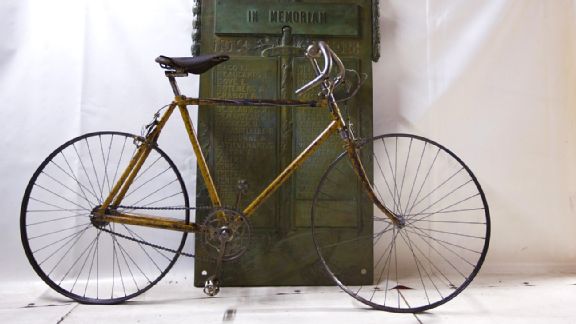 AP Photo/Virginia MayoBelgian cyclists who died during World War I are among those memorialized across Europe.

The 1914 Tour de France started 100 years ago today, June 28, when 145 cyclists rode out from Paris on a 240-mile stage to the port city of Le Havre. One in 10 of those riders would be dead before the next Tour started.

That is because on that very same day, while the Tour cyclists were pedaling those many grueling Stage 1 miles, Archduke Ferdinand and his wife were touring Sarajevo when their driver took a wrong turn onto a narrow street. Unable to turn around, the driver began to slowly back up when Bosnian Serb Gavrilo Princip, fatefully standing on the nearby sidewalk, took out a pistol and shot Ferdinand, an assassination that triggered the First World War.

“The lamps are going out all over Europe,” British statesman Sir Edward Grey reportedly said, and “we shall not see them lit again in our lifetime.”

This was true for many of the cyclists. French historian Jean-Paul Bourgier writes in “From the Flower on the Handlebars to the Bayonet on a Gun Barrel” that 14 of the 1914 Tour’s 145 riders were killed in the war, plus another 34 finishers from previous Tours. Among them were three Tour champions: 1907-08 winner Lucien Petit-Breton, 1909 winner Francois Faber and 1910 winner Octave Lapize. 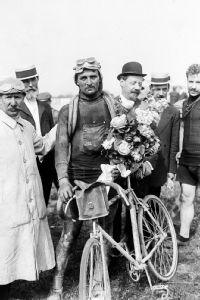 Irish writer Graham Healy describes what happened to those three and other cyclists in his richly detailed, well-researched new book, “The Shattered Peloton: The Devastating Effect of World War I on the Tour de France.”

“It was just something I was conscious of, coming up on the 100-year anniversary,” Healy says. “I was aware that the race had started on the same day the archduke was assassinated. Even though that wasn’t the day the war started, it triggered it. I had been aware three Tour de France winners had been killed, and I wanted to explore that and other guys — who was involved, what became of them.”

Healy found that some of the stories that have been told are not true. For instance, there are two popular tales — you can find them on Wikipedia — surrounding the death of Faber, who won Stages 13 and 14 of the 1914 Tour in addition to his 1909 championship. He was killed in a May 1915 battle that wiped out two-thirds of his regiment.

One story is that Faber was shot while carrying a fallen comrade across no man’s land, though Healy says in his book that a newspaper report from that time contradicts this. The other story is that after receiving a telegram announcing his wife had just delivered birth to their daughter, Faber leaped in joy and was shot when his head rose above the trench line. Healy reports this did not happen, either, because Faber received news of his daughter’s birth four days before he was killed.

Faber’s body was never found so we don’t know precisely how he was killed, but Healy does reveal that the Tour champion had been offered the role of cyclist for his company of soldiers but turned it down.

“I prefer to serve in the trenches,” Faber replied to the offer. “I know all about trench work, and I have more chance of bringing down Germans there than as a cyclist.”

In the end, it was the Germans who brought down the former Tour champion. He wasn’t alone.

Lapize is best known for winning the 1910 Tour, which included a stage over the Tormalet and the Aubisque. So excruciating was that final climb in the Pyrenees for bikes of that era that an exhausted Lapize had to walk his cycle over the top, famously shouting “Assassins!” at race officials as he passed them. He won Stage 8 of the 1914 Tour, which ended with elimination heats at the Marseilles velodrome. Among the cyclists he beat was Emil Engel, who crashed after a move by Lapize, and finished fourth.

Engel, who had won Stage 3 but was ejected from the 1914 edition after threatening officials following his Stage 8 crash, was killed while fighting in the war just two months later in the Battle of the Marne. Lapize was shot down and killed while piloting a fighter plane in 1917.

Petit-Breton, the first rider to win more than one Tour, did not win a stage in 1914 and abandoned the race after learning of his mother’s death. As Healy reports, those were tragic years for his family. Petit-Breton and his younger brother, Anselme, were both killed in the war. Anselme died in a dogfight in 1915 and Petit-Breton, who served with a transport unit, died in a car crash near the front in 1917. 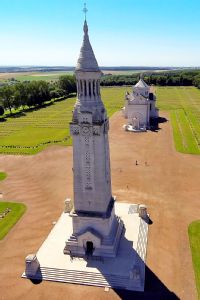 Due to the war, the Tour was not held again until 1919, the summer after it ended. There was a longer, six-year gap in the Tour during World War II, accounting for the fact that last year was the 100th edition of the Tour despite its start in 1903.

The Tour marks the 100th anniversary of WWI this year by holding Stages 5, 6 and 7 near some of the war’s most infamous trenches and battlefields, including where some Tour riders were killed.

Stage 6 starts in the town of Arras, which is near the French military cemetery Notre Dame de Lorette, where there are the remains of 40,000 soldiers, along with a plaque honoring Faber, whose body might be among those of 20,000 unidentified soldiers there. Stage 7 goes through Verdun, where more than 700,000 soldiers were killed.

Stage 5 begins in Ypres, the Belgian town where mustard gas was first used, and there were more than a half-million casualties in another battle at nearby Passchendaele. In advances on Sept. 20 and 26 and Oct. 4 alone, British troops suffered 50,000 casualties and gained just over a mile of territory, which was later abandoned.

“We died in hell, they called it Passchendaele,” poet and soldier Siegfried Sassoon wrote.

“I’ve been to that region — it’s where Paris-Roubaix takes place — and you drive down any road and you see cemeteries with white stones or white crosses,” Healy says. “It’s like going to Arlington or any of the big military cemeteries in the United States. When you see rows and rows of graves, it really kicks in. You see the birth dates and deaths and see they were 18, 19 years old, that they hadn’t really lived. It’s really in your face.

“I suppose the guys who are actually riding in the Tour will be so involved — and they can’t look to their side — that it won’t hit home to them. But it will definitely be worthwhile to all the other people watching.”