At Bi-Partisan Tour Company, we try to show off Union Station as much as possible, it is regularly a part of the Washington DC tours we offer.

Union Station probably reflects better than any other single Washington building the remarkable self-assuredness and imperial aspirations of its age. The architecture is stunningly elegant, both outside and in, and it was one of the first properties in the District of Columbia to be named to the National Register of Historic Places. After having been brought back from near-death in the 1980s, the station is once again the subject of development debate. Instead of dreaming up improbable and unneeded functions like the ill-conceived National Visitor Center of the 1970s, planners are now focusing on the hard realities of the station’s increasingly heavy use as a transportation hub, which strain its resources and demand modernization. A vision of an almost unrecognizably transformed space has been put forth.

While the feasibility of this multi-billion dollar plan is debated, a more immediate proposal is on the table to make alterations to the station’s main waiting room (primarily by cutting two escalator holes in the floor) to allow visitors to more easily access the retail space that has been created in the basement. Repairs have also been underway in the main waiting room and surrounding areas as a result of damage sustained during the 2011 earthquake. All of this activity raises questions about how well the station’s grand interior spaces have been preserved and whether it is time to revisit compromises made back in the 1980s. Most notably, a few of the building’s finest public spaces—the Ladies’ Waiting Room, the Lunch Room, and the Smoking Room (or Men’s Waiting Room)—suffered in the 1980s rehab and could once again be grand if finally given the chance.

To the casual observer hurrying to catch a train, it would appear that Union Station’s interior has been carefully preserved, and in many ways this is true. A group of architects and developers, including Benjamin Thompson & Associates, who had worked on Boston’s Faneuil Hall and Baltimore’s Harborplace, as well as Harry Weese & Associates, who had designed the Metro system’s stations, collaborated on the redevelopment under many watchful eyes, including those of the National Park Service and the D.C. Historic Preservation Office. Painstaking attention was paid to bringing the building’s four most prominent public rooms—the Main Waiting Room, West Hall, Dining Room, and Presidential Suite—back to something close to their original appearance. Approximately seven pounds of 22-karat gold were applied as leaf to the 320 octagonal coffers that line the main waiting room’s vaulted ceiling. The original white marble floor, long since replaced and cut into for the visitor center, was carefully reconstructed. Plaster everywhere that had suffered deterioration and water damage was meticulously restored. Original wall colors, buried under twenty-two layers of paint, were recreated, as were delicate murals in the former dining room. The entire effort, from 1985 to 1988, was widely acclaimed as a preservation success. 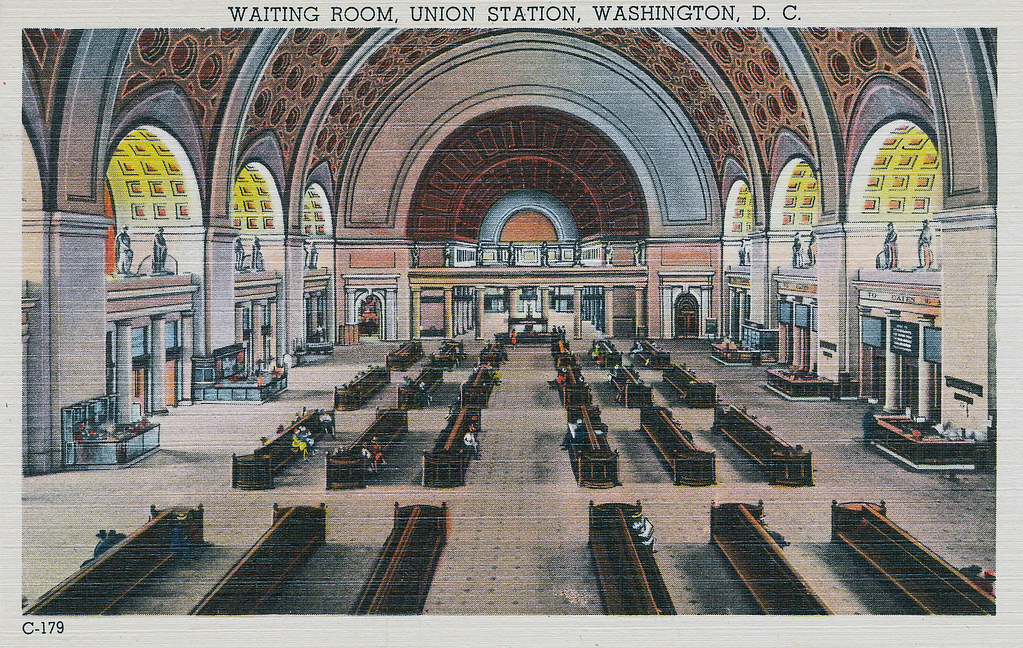 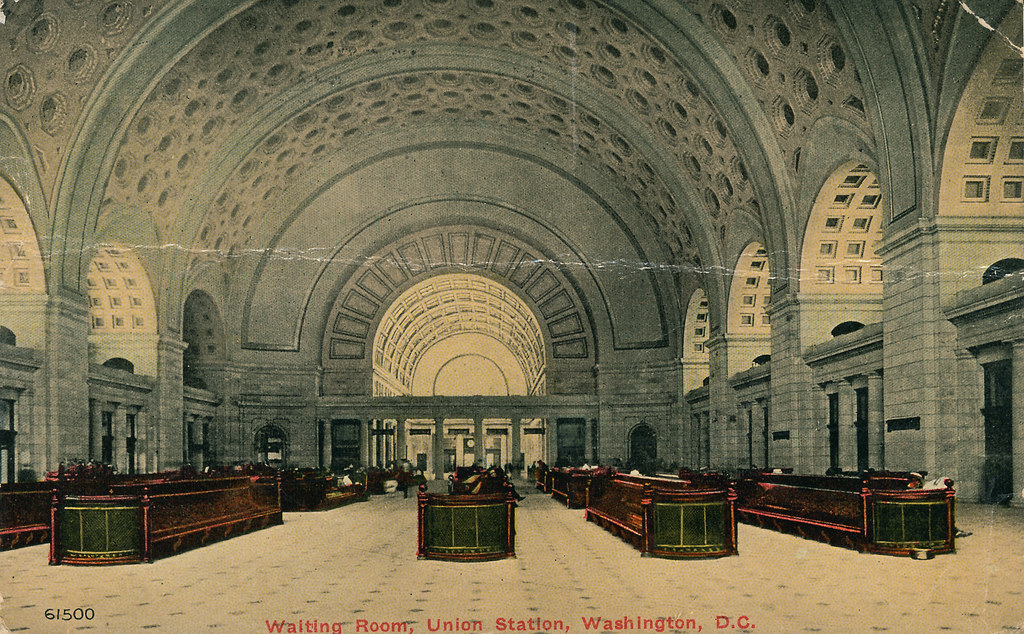 What is now known as the Main Hall was the station’s general waiting room, as seen in these postcard views. Other than the addition of the raised cafe pavilion in the center and the lack of mahogany benches, this space was largely restored to its former appearance in 1988.

The Presidential Suite was designed to be completely separate from the main waiting room and to serve as a reception area for the chief executive. President James Garfield had been assassinated in the old railroad station on the Mall, and homeland security planners of the day aimed to prevent a repeat of that incident. After World War II the President wasn’t using the station as much, and the room was turned over to the USO for use as a servicemen’s lounge. It now hosts B. Smith’s Restaurant. 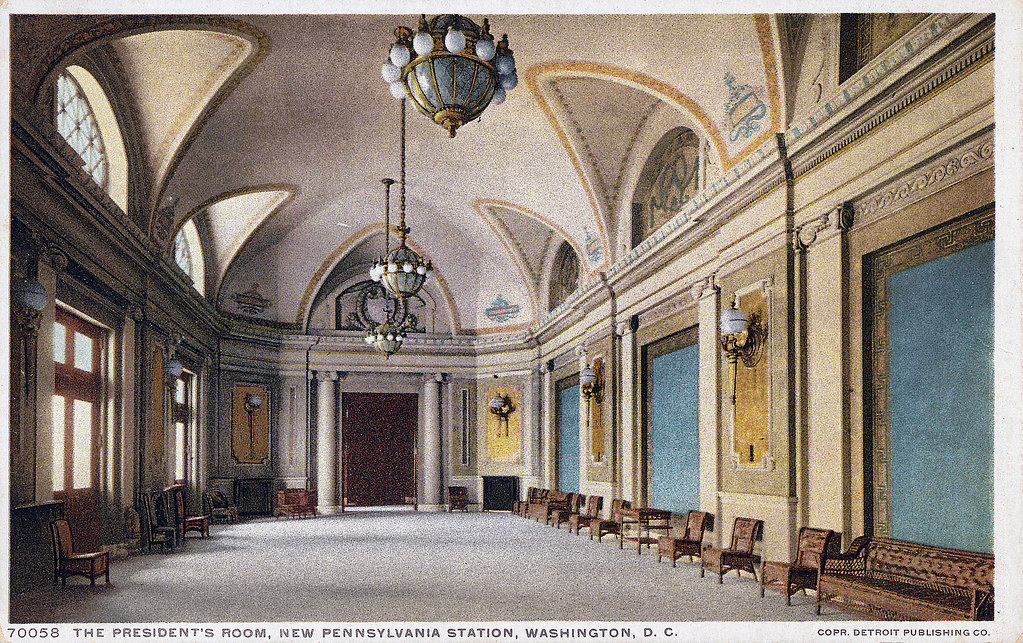 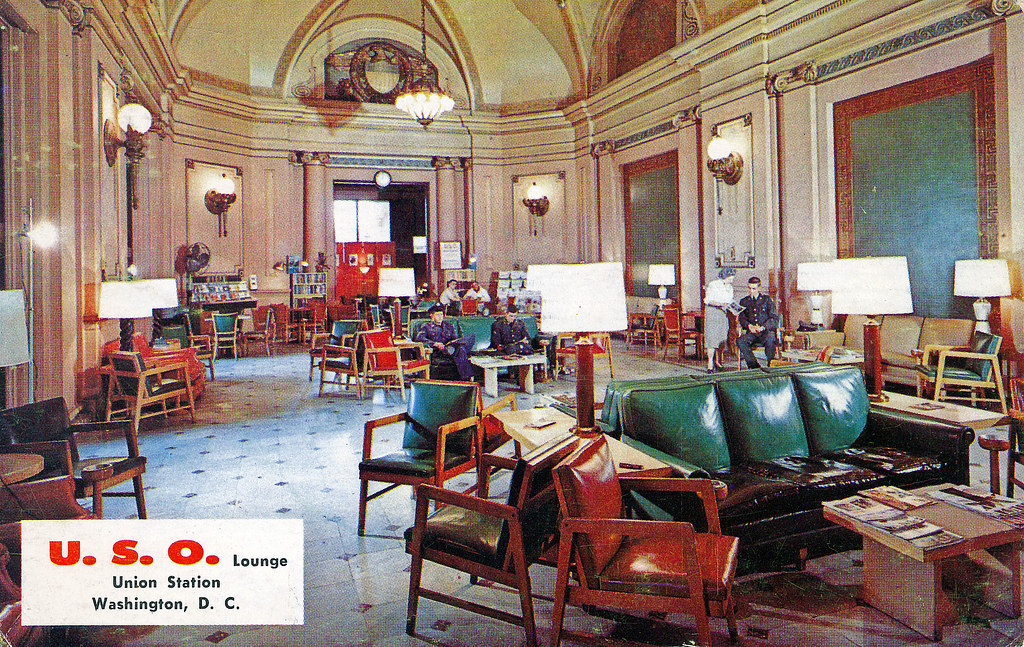 The former dining room, just to the east of the main waiting room, was meticulously restored in the 1980s rehab and now serves as a concourse for a variety of retail stands. 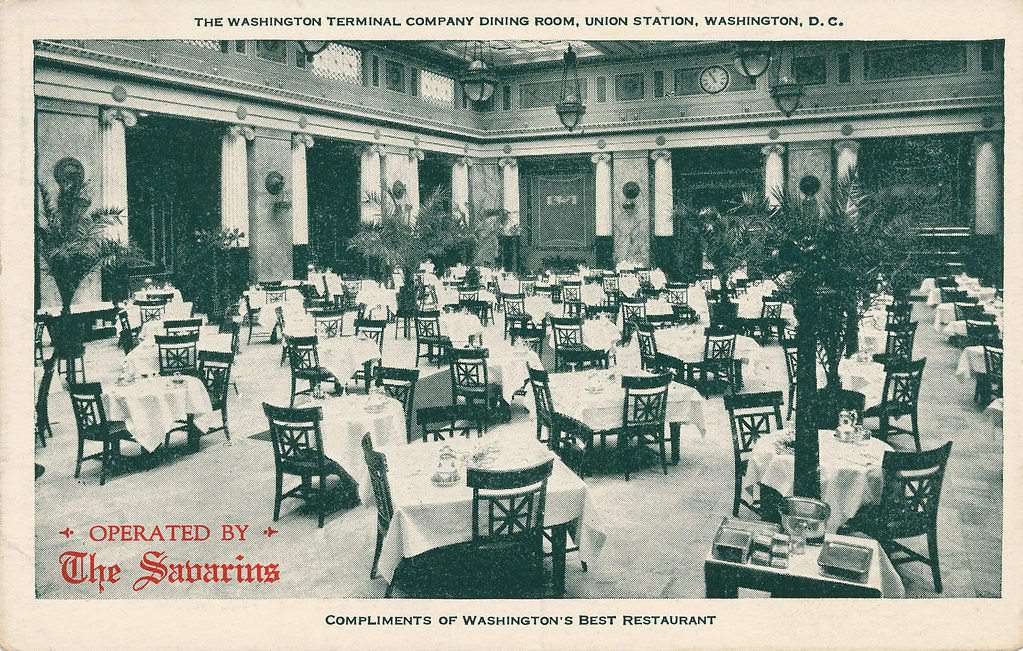 The cost for all of the beautiful restoration work was that developers were allowed to radically modify other interior spaces (while preserving the underlying historic structure). For example, the vast passenger concourse immediately to the north of the main waiting room was converted to retail space. While the original walls and arched, skylit ceiling were preserved, the space was nearly filled with large, two-level steel structures framing numerous retail shops. Large holes were cut in the floor for stairways and escalators to the new food court installed in the basement. The effect was to dramatically alter the former terminal space, creating an enclosed shopping mall that bore no recognizable connection to its former use.

No one currently plans to remove all those shops and recreate the vast open space of the old concourse. But what about some of the station’s other “lost” interior spaces? The former Ladies’ Waiting Room is an example of a space that could be strikingly restored to its former glory. The room is located at the front of the station on the south side (right side as you face the station from in front). Its imposing neoclassical entrance is at the southeast corner of the main waiting room and now leads to the Thunder Grill restaurant, which fully occupies the old waiting room. Originally open space, the room offered large bright windows on its south side and a graceful, elliptically arched ceiling. It featured fine tapestries on its walls and served as a smoke-free haven for women travelers. During the 1988 renovations, this space, like the Passenger Concourse, was broken up by the insertion of a raised steel-framed, mid-level platform that gives the restaurant some extra “mezzanine level” tables. Walking into the restaurant today, one has no idea what the room used to look like. The following views, however, show what it once looked like. Removal of the steel “mezzanine” would sacrifice some restaurant tables but bring back a magnificent historic space. 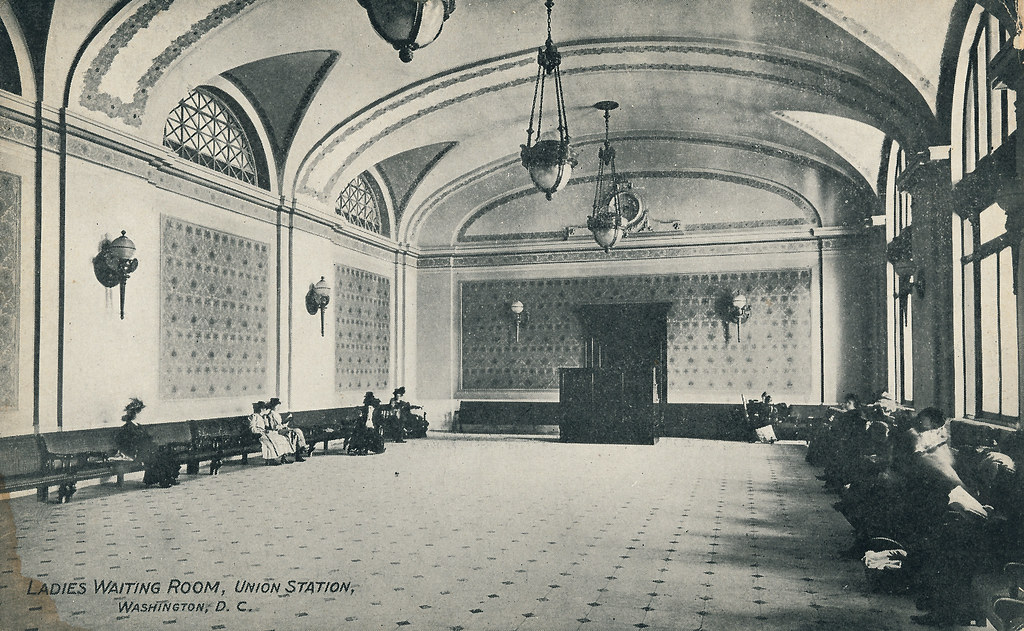 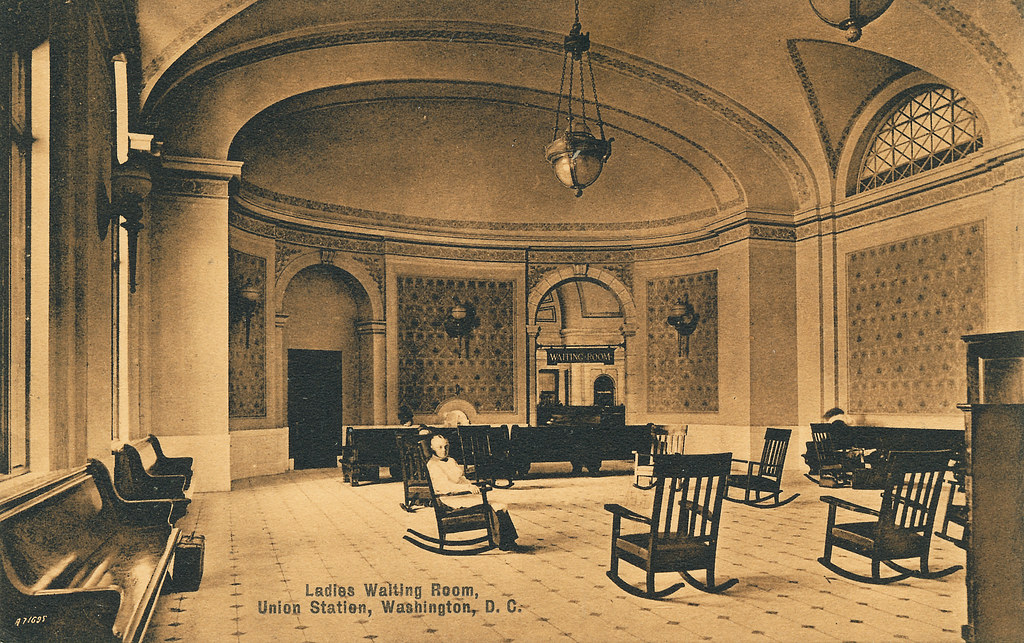 The third unrestored historic space is the former Lunch Room located just north of the dining room. The dominant original feature in this high-ceilinged room was a marble counter shaped like a backwards “J” that was long enough to provide seating for many customers. Originally the walls were decorated with murals in the same Pompeian style as the adjoining dining room. During the 1988 renovations, this space was divided into two floors, with a stairway to the upper level installed near the entrance on the northeast corner of the main waiting room. The upper level includes restored elements of the lunch room’s walls but the lower part, which is now used for retail stores that open onto the former dining room space, has all its historic features hidden. 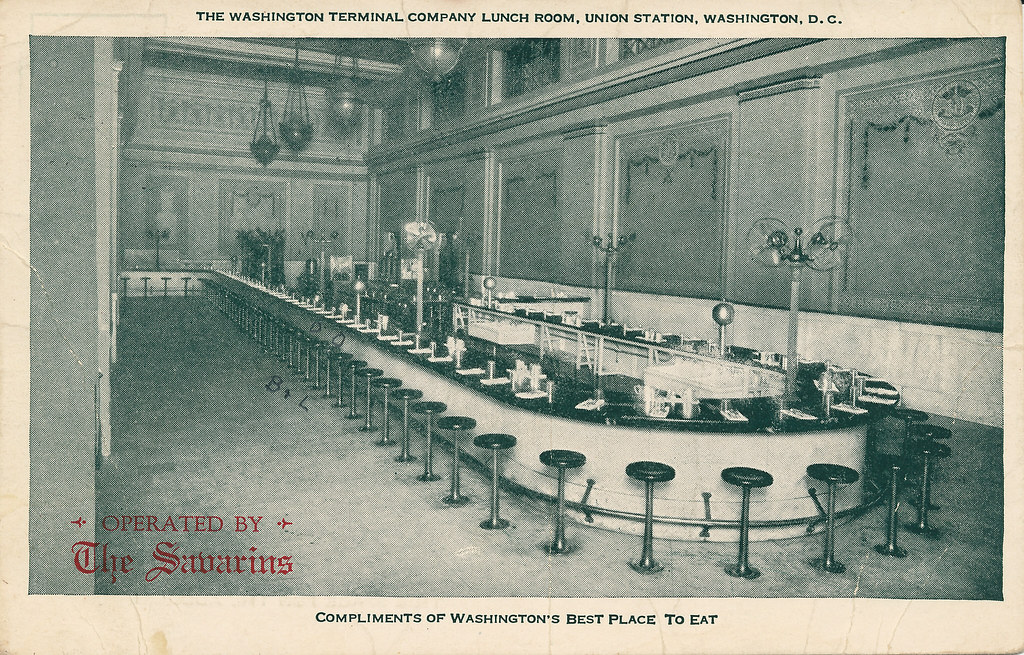 The restoration compromises made in the 1980s were well understood, deliberate, and much worried over. Congress wanted the federal government to be free of having to take care of the station and willingly allowed commercial development as a way to get the building preserved and made once more into a viable enterprise. No one knew for sure how the reinvented building would work, and so the developer seemed to focus on attractions that would make local people visit the station purely as a retail destination (mall) rather than for its transportation purpose. Building a multi-screen movie theater in the basement, for example, was seen as a key anchor to the enterprise, given it wasn’t feasible for a department store to anchor it. Of course, the movie theater has now long gone out of business with little ill effect. And no one cares about department store anchors any more. Instead Union Station is thriving for what it really is—a major transportation gateway to the city. The changed circumstances would seem to raise the question of whether the tradeoffs made in the 1980s are still valid. Since station patronage is virtually guaranteed to continue and even increase, maybe now is the time to give serious consideration to bringing back a few of the station’s lost interior spaces.

The D.C. Preservation League and the Committee of 100 on the Federal City recently filed a proposed amendment to the National Register listing for Union Station that would extend historic designation to the station’s important interior spaces as well as a number of external features, such as the great sandstone retaining walls and the remaining orignal train sheds, that lie to the north of the head house and contribute to the station’s historic presence. The two advocacy groups are members of the Union Station Preservation Coalition, which has issued a call for a deliberate and reasoned approach to any new alterations to the historic fabric of Union Station through adherence to basic preservation principles. Let’s hope that everyone can agree at least on this as a basis for moving forward.